The giant betta (Betta anabantoides) is a type of freshwater ray-finned fish in the Macropodusinae subfamily, part of the gourami family. It is native to southern Kalimantan, the Borneo region of Indonesia. It is present in several freshwater habitats and is a paternal mouth-broader.

Giant bettas are well deserving of their name to their size. The appearance of the giant betta was the result of hard work and cautious, selective breeding. In 1999, Team giant created the first giant plakat through plakat betta.

The target being bettas which reach at least 3 inches in length. But now there are evidence that they can grow to 5 to 7 inches long.

They have also given rise to considerable controversy in the hobby. Betta enthusiasts are some who are divide as to whether or not they believe that betta giantism is caused by a single gene.

Simply the result of careful selective breeding for increased size.

The reality may well be a mixture of the two at the end of the day. We know for a fact that significant betas can be breed simply by selecting the largest fish to breed over successive generations.

What is a giant betta fish?

The giant betta is the same as regular betta fish, but the body size grows larger than traditional betta fish. They can grow up to 3 – 6 inches in general. But I have to see giant betta fish that is 7 inches long. Brooders of this fish have used a selective breeding process when creating this marvelous fish.

Giant betta fry is estimated to develop at a much faster rate than normal betta fry, needing much more food to reach their full potential.

As a result, giant-normal size differences are clearly noticeable from just a few weeks old.

Young giants will be adults by 2-3 months old with proper food and conditions. So by 4 months old, they will be the size of your typical 8-month-old show betta.

As long as they are 7-8 months old, giant bettas can reach at least 3 inches long. At about 6 months of age, the differences in body type are evident.

At a year old finally, they stop growing, but until it is around 18 months old, the fish can continue to put on width and weight.

Giants usually can have shorter lifespans because poorer immune systems, and vulnerable to bacterial infections, so the lifespan of giant betta is considered to be short on average. But the expected lifespan is 3-5 years.

In just five months, some giant beta strains will reach a length of three inches (including the caudal fin). The Giant Betta accepts quality flakes but prefers to consume live or frozen food.

When grown-up, giant bettas need less food. But, still able to eat more than twice as much protein as normal betta requires on a daily basis.

Remember that giant bettas should be kept in larger containers than regular bettas and receive more frequent water changes. Because of the increase in waste produced as a result of consuming a high amount of food

Read more How Long Can a Betta Fish Live In a Fishbowl Without A Filter ? Know All

Yes, sometimes they can be adhesive. It depends on the individual fish. To look more impressive, male and female king bettas flare or puff out their gills to scare rivals or attract mates, as well as when they’re startled.

They are not ideal for a typical community tank due to its aggressive nature, particularly towards fish species with long, flowing fins. All bettas, also in solitary tanks, need a place to hide occasionally. They can set up a territory that they will guard aggressively, based on a plant or rock.

Hold Giant Betta in a well-planted jar with hiding places. They prefer soft, slightly acidic, low-flowing water. Giant bettas are a friendly species and the male can grow up to 5 inches in length.

Fish are fairly easy to care for, but still require high water quality, as do all fish species, to ensure that they have an appropriate filtration system and that frequent changes in water are made.

Giant betta needs 10 gallons minimum, but bigger is always better because they like to move around a lot. If you put them in a too-small tank, they will never reach their full size. Always select a tank with enough space for him and not too deep. Some people keep them in 5-gallon tanks. But it is not recommended.

if you need more advice about the care giant betta we have a separate guide.

The giant characteristic is heritable and seems to be codominant for now. With carriers being a’ halfway house’ between average bettas and giant bettas in terms of their final adult size.

Simply put, if you raise two giant bettas together, all offspring will be giants (although their final adult size will vary). If you raise a giant to a regular beta.

Then the offspring will carry the giant gene and as a result, will grow to an intermediate size between the normal and the giant.

Such fish are call as ‘ half-giants. ‘ Breeding two carriers together will give you 25 percent full-giants, 50 percent half-giants, and 25 percent normal bettas.

Giant betta is primarily carnivorous fish. They live in South East Asia, where small insects and larvae make up the vast majority of their diet.

The meat they normally eat is going to be high in fiber and protein. The insect they consume also contains nutrients from the food they have consumed in their stomachs.

If you were going to let your betta live off from plants in your tank, that is the worst feed you can give them. That being said, the odds are in the wild, they may sometimes consume plant life, but for them, there will be almost no nutrition.

Read more on How to feed Frozen Food

Read more on When to feed Frozen Food

How much to feed a giant betta?

In my experience, 8 to 10 pellets are enough if you provide them once a day. If you feed 2 times a day, 5 pallets for on feeding round would be enough. But they will require more food than regular betta because of their large body size.

If you go out for a couple of days, instead of adding more to the tank, let the fish go without food. Ensure the feeding schedule is regular, and don’t worry if the fish doesn’t eat when stressed Bettas tend to go without food for up to 14 days before they die.

Adult giant bettas are susceptible to constipation. Which, if not properly handled, can lead to death. Live brine shrimp and live or frozen daphnia should be made a daily feeding scheme because both these foods serve as a mild laxative.

Similarly, applying Indian almond leaves or leaf extract to the water of a giant beta is a good idea. The best treatment if the giant gets constipated is to starve the fish for a day or two. Also, it is common to add a little salt to the water.

If the giant betta gets constipated feed him insides of a baked, green pea always helps make things move again. You should cut back on their feedings once they reach adult size.

They follow the normal sleeping pattern of fish, which you can read here. Also, they might sleep on rocks and plants in their tank.

Athapon Ratanapichad (Uncle Sara), his son Natee, and Wasan Sattayapun are part of this team. In 1999, Athapon and Natee found among the other bettas on their farm an unusually large green male plakat.

Athapon had already found that his green bettas seemed to grow much larger than those of other colors, but it was more than three inches long.

The size of this fish was almost definitely the result of a genetic mutation (or genetic mutations) that may have increased the rate of development or caused anything that restricts growth in bettas.

As it turns out, whatever the mechanism, this was a very lucky mutation for the betta hobby.

In the hope of generating more giant bettas and developing a whole new strain, the Ratanapichads bred this giant male to the largest female they had at the time. Only a small percentage of the fry grew to be big in the first generation.

Nevertheless, they were able to increase the percentage of giants in each brood by consistently selecting the largest fish for breeding in each subsequent generation.

It took Team Giant as little as five generations to produce the first three-inch bettas, which made up about one-fifth of the spawning fry.

Once they had successfully produced giant bettas, Team Giant began expanding their scope by outstripping those giants in a range of colors to standard-sized bettas of various other breeds.

They had to undergo the tedious process of selecting the largest fish from each brood each time they tried a new colour in order to produce fish of the right size.

Although the two most popular are asymmetric half-moon plakat and half-moon (and the eventual delta and super delta which come as part of the half-moon package).

also see the guide on Elephant Ear Betta they are one of the most beautify Betta you can buy.

Is a king betta the same as a giant betta?

In general, their pigments are vivid beige to white. King betta females are less colorful than males. King betta’s life span is short, usually 2–3 years, rarely exceeding four. The King betta is a member of the Osphronemidae.

How to Identify Giant Betta

their large body size usually places them. They typically grow between 3 – 6 inches.

They should be acclimated as normal betta fish. Check the proper pH and temperature at the bare minimum. Betta’s are highly sensitive to environmental changes, and any sudden changes in water parameters or temperature could cause too much stress for them. Stress contributes to shock, disease susceptibility and could even cause death.

giant betta plakat has the same body feature as plakat betta fish. But they have a large body size and fins.

Do giant betta jumping out of the tank?

You’ll be shocked to know that the jumping out of the tank can jump out of their tank. This is common when the tank is too small, bad water quality, and A Poor Sleep Cycle.

Read more What is a koi betta? | Koi Betta Care Tips You Must Know

Their mail and female are similar to regular bette there are no changes in that department.

How big is a king betta?

King betta’s body size is around 2–2 1/2 inches. In other words, king betta is aggressive betta fish.
I have seen king betta that is 3inches long. The King betta is a member of the gourami (Osphronemidae) family (as are all other bettas) and prefers a temperature of 78-82 °F.

Yes, giant betta fish are aggressive when comparing with others. But it mostly depends on individual fish. Most of the king betta are selectively bred for fighting, so they are more aggressive and more colorful.

Read more Wild Betta Fish: The Beautiful, and Rear | All you need to know. 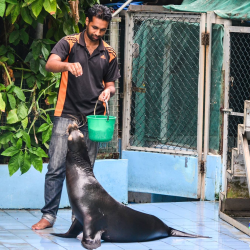